skip to main | skip to sidebar

You can now find me here...


It'll be while before I've finished the Wordpress site with widgets, plugins and such like, but daily updates will be there from now on. There will be no more Blogger updates here!

Thanks for visiting this past year, I look forward to seeing you on my new site.

I have to go to Cardiff today for a meeting. So the internal combustion engine it is.

Last day at work until next Tuesday too! Whoop whoop!

Yesterday's pedal home was a standard job, nothing to report.

Not very fast, a pig of a headwind to push against...
Posted by Clive Chapman at 6:31:00 am No comments:

Came in on my road bike this morning, mainly because I didn't get up on time to be here if I came via the towpath. Bad skills!

I pedalled over Frankley Beeches and via Harbourne. Lights on too. Felt pretty good, the hills on route get dealt with fairly quickly for a 46 year old fat bloke, so happy days.

Yesterday's pedal home was the canal, NCR5 and a quick spin round the Lickey's, 'cos I could!

The towpath through Birmingham City Centre at Brindley Place was rammed with pedestrians so it was a go slow through there with plenty of "Excuse me's" shouted out. It was pretty wet too, me and the bike were pretty filthy on arrival ay home, that dirty my daughter Fay wanted a picture of me. 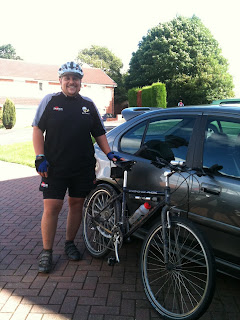 This morning was the first commute in when It was dark when I started out and I needed my lights on. Bummer, that means Autumn is nearly here.

I also decided to commute in on NCR 5 and the canal for a change. I've been road biking a lot recently and my Ridgeback has been pining to be given some playtime. Plus I get so sick of bloody roads, give me a trail or a towpath anyday!

I've said it before, but changing your commute and or changing the bike you pedal is massively important to keep things fresh. I know I'm lucky to have a choice of bikes and other people haven't got that luxury. But boredom is one of the enemies for a constant commuter and if you're doing it for weight loss you need to keep doing it!

The pedal in was great though, enjoyed being on the canal and the solitude, as usual I never saw a soul which was great.

My body is feeling fine still after the 100 miler which in all fairness is a bit of a surprise to me. I was expecting to suffer for the century. But I guess my post ride stretches and recovery ride yesterday have all helped my cause. Looking forward to the 113 miler to the coast in Wales in 2 weeks now!

Stats for this morning's commute:

I was awake at 0340hrs to the tuneful screaming of the Spawn of Satan. I quickly got dressed and was going to pile in to his room to settle him back down when he went quiet. Result. Downstairs, grabbed a bit of brekkie and packed my sandwiches and was off!

Lights on my bike for the first time since March/April, didn't like that.

Anyway, off down towards Solihull then Catherine De Barnes. No problems, no traffic apart from the odd mini cab bringing late Saturday night clubber's home. Got waved at by a young bloke staggering home down Seven Star Road which made me laugh.

Got to Meriden in good time. Meriden is famous in Cycling circles as the very centre of England, it's a bit of a mecca apparantly according to my Dad who used to pedal a lot.

There's a memorial there to cyclists killed in both World Wars.

Ok it was dark and I knew the photo would be crap, but I had to take a snap of the memorial with my bike parked up there. I'm sure Google will provide a better image. 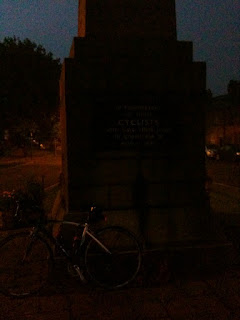 Onwards then to potentially the worst part of the ride, that of skirting Coventry on the A45. Not pleasant.
But because of the hour and the day, there were very few tin boxes trying to kill me.
Pedalled past the old Peugeot works at Ryton on Dunsmore which is now a flattened derelict site, yet another example of the death of British manufacturing, even though it was a French company, but you know what I mean...quite sad.
Then it was the start of the Fosse Way. 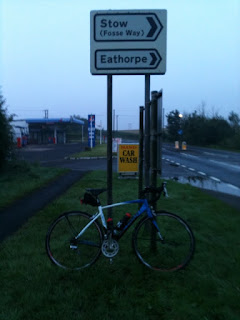 It was more lumpy than I remember from back in the day, lots of ups and downs, a bit like a roller coaster, nothing hard though. 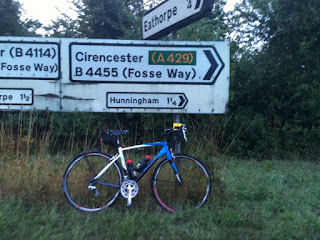 The minute I saw my first Cotswold Stone house... 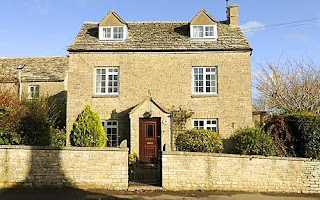 The road went up alarmingly, ahh, that'd be the Cotswold Hills then.
Next stop the end of the Fosse Way at 53 miles in for me and still feeling ok. The village of Halford. 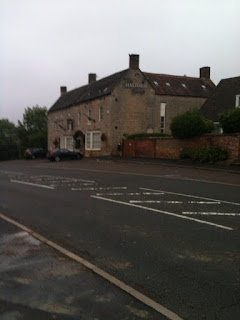 A turn off right here and head towards Bidford on Avon via the leafy lanes of Warwickshire and the village of Mickleton. A bit of my route actually took in a bit of NCR5 which JB must have pedalled back in April.
I stopped at Mickleton for my jam sandwiches and a bloody good drink. I was starting to feel it now. Nothing serious but I knew I'd done a distance. 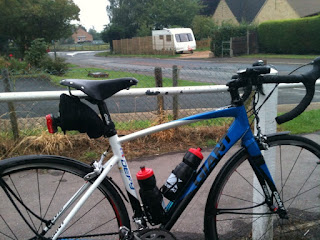 Sandwich stop at Mickleton.
Then it was a belt along through Honeybourne and past Bidford Gliding Club to get to my 20 minute rest stop at Bidford by the River Avon. 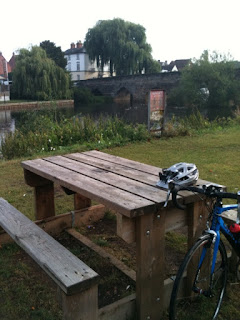 I left Bidford at about 0910hrs which is about 70 miles in on the ride. This was going to be the tester. It was all uphill and a headwind started up the minute I crossed the river. Great!
I was now seriously tired, up until Bidford my average speed was 16.9 mph, which I thought wasn't bad. I knew it wouldn't be that when I got back!
I got to Astwood Bank just outside Redditch after a real struggle getting out of the Avon Valley, and got to the traffic lights at the village centre. I went to unclip as the lights were on red and my left calf cramped up so much I couldn't get my foot out of the pedal and I nearly toppled over like a SPD newbie! Just saved it! Time for a refuel then. I parked up at the service station just over the lights and had a Mars Bar and a bottle of Lucazade and had a walk around the forecourt while I refuelled. I also answered a text of support off Matty Lad while I was there! Oh and thanks for the Tweets too, they did help!
Next up Redditch, not a great place to pedal through, or motorbike through, I saw a bike on its side by the big island, it's actually on the footage on the film below. The motorbiker was ok as I saw him walking around picking bits of his bike up with the car driver who I assumed was involved in the accident too. Haven't a clue what happened.
Out the other side of Redditch and pedalled towards the village of Beoley, which meant going up Church Hill. My first granny ring climb. very tired now, thoughts of walking up the hill started to enter my head. But I didn't.
Then the other side of Beoley was my first problem with navigation. I knew I had to turn left to get over to the Wast Hills, and I knew I was roughly where I should be turning left so I went for it at the next left which was worryingly sign posted Carpenter's Hill. I never saw any wood workers, but I definately saw a hill! Another Granny ring battle that was that steep that I had to get out of the saddle to force my way up. My rear tyre kept spinning out too as the ground was that slippy with leaves. When the rear wheel span out I sat down to try to regain traction, which then meant I couldn't pedal strongly enough! Doh! I got there though and at the top was a group of cyclists doing a spot of map reading. After relating my story of the hill I'd just come up, they decided that was the way they were going. Good skills, I'd have sooner gone down it!
That was my last stop, plain sailing (relatively) home. Apart from a painful right knee and aching shoulders I was pretty much ok.
My cycling bits were fine, legs, cardio vas, gentleman's area etc. It was as usual all my old rugby and army injuries giving me grief.
I was out for 7 and a half hours for 106 miles.
Average speed ended up at 14.7 mph.
Maximum speed was 41mph.
The stats are off my cycling computer as my Iphone's battery wouldn't have lasted the course.
Video below, motorbike crash at 2 mins 50 secs in:
This morning I got up and did a recovery ride of just 11 odd miles. All low gear easy spinning. No rush. The objective was to get any remaining lactic acid out of my legs to promote recovery and stop any cramping. I did a lot of calf, quad and hamstring stretches yesterday afternoon as I could feel my legs starting to tighten.
Stats here:
Started: 16 Aug 2010 06:58:29
Ride Time: 52:37
Stopped Time: 0:00
Distance: 11.18 miles
Average: 12.75 miles/h
Fastest Speed: 38.64 miles/h
Climb: 217 feet
Calories: 531
Route here:
http://maps.google.com/?q=http://share.abvio.com/d1c4/1bb6/4b96/d37e/Cyclemeter-Cycle-20100816-0658.kml
Hopefully that's the August 150 kicked into touch now. I make it I've done 157 leisure miles.
My final thoughts on the pedal is that it was nowhere near as bad as I feared. Maybe I'm fitter than I thought. Or I'd just got my head around doing the distance.
What I would say is that if you fancy doing a 100 then do it, you're obviously ready as you're thinking about it!
Posted by Clive Chapman at 9:36:00 am 13 comments:

We're off down the canal in Stoke Prior today armed with loads of bags to get fruit and veg. There's Damsons, Plums, Apples, Horseradish, Water Cress, Blackberries, Raspberries,  Sorrell and God knows what else!

Wifey is going to be busy, Jam, Chutney and soup making for her then!

Luckily the Middlesex Sevens is on tele today and I can watch that when she's creating. Looking forward to it, Hunty and Brakey are playing for Northampton, they're 2 players from my club who are on loan to them for the competition. It's being played at Twickenham, arguably the best stadium in England. It's a very big annual rugby event. It's an excuse for piss up truth be told, but there's some good rugby on show too with a ruck of internationals taking part.

The weather is set fair and my bike and kit is all ready to go for the 100 miler tomorrow. Just want to get it done now.

Watch out for Tweets tomorrow.
Posted by Clive Chapman at 8:52:00 am 2 comments:

Clive Chapman
Birmingham, England
A fat broken bloke who at 45 years young was inspired to get back on his push bike to get fit (and thinner). A 22 stone 4 pounds starting point in July 2009 and at just 5' 8" it was getting beyond a joke. Follow my trials and tribulations here!